It seems like it has rained every day for the past month in the Champlain Valley of New York and Vermont. Combined with 70-80 degree temperatures, the fungal population couldn’t be happier. It’s like one continual fungal feast over here, and I couldn’t be more psyched. Why? Because I’m absolutely infatuated with the idea of stress in an orchard. 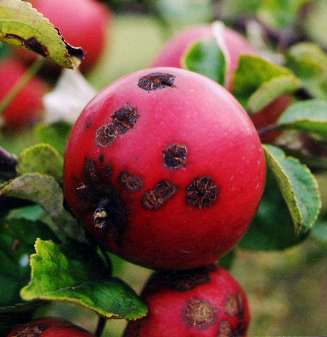 In A Radical Orchardist: Part One (which I encourage the reader to read before pursuing this essay), I re-introduced my thoughts about how apple scab, a fungal disease, increases the brix (sugar content) of the apple, which translates into a higher alcohol content once fermented. For hard cider purposes, I thought, perhaps we shouldn’t be spraying-late season fungicides for cosmetic fungal diseases like apple scab, since lingering fungicide residue has been known to kill the ferment (the yeasts) in the wine and cider realms. I also re-introduced the idea of managing apple scab as a value-added disease for cider apples, a thought that is about as radical as it gets these days in the apple world. A thought that I’m still excited to explore and understand in order to embrace it or dismiss it.

This year, I’ve been actively looking for scientific research on the effects scab has on apples, from a nutritional standpoint. I want to know how the apple reacts to scab; What does that fight look like? Does a stressing agent like apple scab bring about super fruits? This research is slow, mostly due to the fact that I don’t have access to any scientific journals, but it’s progressing and has me optimistic. The following is a report on my findings and thoughts.

My journey started when I found a paper about the effects of apple scab on the peel of an apple. The article, which can be found here and simply broken down here, stated that a peel covered with scab lesions is higher in polyphenols than one not covered in scab. What’s the big deal? Quite a bit, actually. This is a big deal.

Phenols, such as chlorogenic acid (as seen in the top graph), are classified as antioxidants, meaning  that they tend to prevent or neutralize the damaging effects of free radicals in the body. Free radicals are chemicals that have the potential to cause damage to cells and tissues in the body.  Many of the phenols mentioned in the paper above are related to resveratrol (the polyphenol found in red wine which got a lot of news a while back for making wine drinking a life-saving activity). When researched in the skin of non-scabby red apples (aka: what you see in a grocery store), they were found to contain powerful antioxidant capacities, along with anti-cancer, anti-inflammatory, and cardio-protective properties.

Now, take those phenolic values from the skin of the non-scabby red apple and multiply them by at least 3+ times. That new value is one coming from an apple with scab infection. To further push this point, this article suggests :

Folks, this is superfood status and at the very least, people should try to source ugly organic apples and eat the peels. Research says that doing so might save your life someday.

Now, to project these findings onto cider…

What makes a cider apple a cider apple? The quick universal answer most people know is that it’s in the tannin. Tannin is a collection of phenols such as chlorogenic acid, phloridzin, epicatechin and the procyanidins (source). Only the procyanidins are considered “true tannins” because they have the ability to tan things like animal hides and give the drying sensation we recognize as astringency (aka: the sensation you get when you stick an acorn in your mouth). For the most part, bittersweet apples have the most tannins, or phenolics, and dessert apples have the least.

A bittersweet apple, taken from this Serious Eats article, is described below:

If there is one style of apple prized above all others by American cider makers, it’s the bittersweet apple. Affectionately referred to as a “spitter,” these apples are low in acid, high in tannin, and impart the classic flavor of finer French and English ciders. At first bite, most would consider bittersweet fruit inedible. But what is ill suited for the fruit bowl is ideal for the cider press.

For the most part, America’s high acid, high sugar apple crop provides all the fuel for fermentation and puckering power necessary for a great cider. But what that fruit lacks is tannin—the molecules that impart astringency and provide a cider’s texture—and bittersweet apples fill this void.

Ignore the yellow highlighting, and the column about gelatin

I hope your wheels are turning like mine were, but in case not, let me break it all down for you.

Cider apple varieties are known for their higher levels of phenolics, because those phenolics (aka tannin) distinguish them from dessert fruit. Those phenolics involved in making a cider apple a cider apple are also the same phenolics that increase in concentration when the apple is stressed with apple scab. If you refer to Figure 1 above, you’ll also see that in addition to high levels of polyphenols, a bittersweet apple is one with a higher brix. Let me remind this audience that this whole Radical Orchardist series started with the deletion of an article I wrote about how apple scab increases the brix in apples.

I’m no chemist, but it seems to me that stress has the potential to send some dessert varieties into the realm of a bittersweet. Now, how about stressing a cider apple? Is the increase in phenols due to stress worth it to the cider maker and the consumer? This study says that phenols in hard cider are absorbed, metabolized, and excreted by humans. Meaning, we’re getting the nutrients. 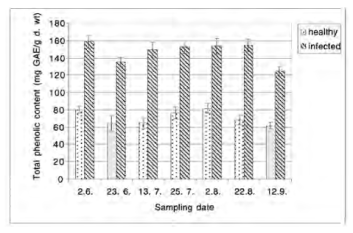 It makes sense to me. When stress occurs, the apple’s response is to pump the site of infection/attack full of phenolics (see graph to the right) . Look no further than your forest’s edge to find wild, highly evolved, inedible tannic crabapples that serve my point. The crabapples have evolved to contain these phenolics without provocation. The lesser-evolved dessert varieties, however, may need to be provoked through varying degrees of stress in order to produce a more nutrient-dense product, or one that more resembles a bittersweet cider apple.

What does this mean for management? Back in the first A Radical Orchardist essay, I irritated a few folks with the question:

What is a cider apple? Sure, you can have all the old French and English varieties like Dabinett, Frequin Rouge, Tremletts Bitter, Norfolk Beefing, etc, but if they are managed the same as dessert apples…are they really cider apples? I don’t think so.

And I still don’t think so. I believe that growing cider apples requires a completely different mindset than growing dessert fruit in order to make high quality, nutrient-dense, healthy organic hard cider. To me, a part of being a cider orchardist involves learning how to balance stress within the orchard through organic means. What do I need to give the tree in order to replenish the expense of fighting off an infection? What is the tipping point of too much stress? I whole-heartedly believe that these, plus many more, are the questions we should be asking. Imagine a world where the value of an apple comes not from its looks, but from its nutrient content. That’s what I’m aiming for with stress, and I believe there is value in that.

Please, those of you who are researchers…prove me wrong. I have admitted to the fact that I’m no chemist, and without academic ties, its completely reasonable that my understanding is flawed from the free book snippets and articles I find online. Send me a response with accessible PDFs, I’ll make sure to post it in a follow-up essay with reasons why I agree or disagree. Hopefully some great questions will come out of it and some university or private foundation somewhere will want to investigate.

In the meantime, the take home message is to #eatuglyapples and #drinkuglyapples. Embrace the scab, avoid the rot and challenge the status quo.

Postscript: Earlier in this essay, I included the following phenolics to define tannin. They were chlorogenic acid, phloridzin, epicatechin and the procyanidins. From this article, it states that apples infected with scab had: