Today I ate 6 pears, 11 apples. I tasted 14 pears, 24 apples. I managed to drop off apples at my rendezvous point on time for the delivery guy, and all else after that meeting at noon went down hill. Tis the season to be perpetually late to appointments/meetings due to the abundance of fruit on the roadside.  Also: Tis the season for elevated fiber consumption and trying to deal with it.

I’ve wanted to write a blog post about fruit exploring for ages now, as it is an exciting and integral part of my fruit life. Today’s essay will only be a brief glimpse, as I am writing a book on the subject at the moment. But I wanted to take a moment to tell you about my Tuesday.

Earlier this year, I was putting away the “Pears of New York” book by U.P Hedrick and had this impulse to open it and look at one of the colored plates. When I opened it, the pear I landed on was called “Vermont Beauty.” I’m right across the lake from Vermont and one of the orchards I work with is in Vermont, so I decided to read on…

From this book, I learned that this pear was a seedling planted out by Benjamin Macomber of Grand Isle, VT…an island in Lake Champlain. I currently live across the street from Lake Champlain! So, I got to hunting. The first step in fruit exploring is research, which occupied an entire Sunday. After having an idea of where to look for this pear, I called my good Vermont friend Meg Giroux and we went fruit exploring for this pear over Memorial Day Weekend.

Fruit exploring involves a lot of cold-knocking. “Hi. My name is Eliza; I’m a fruit preservationist and I have a story to tell you [insert story for specific fruit]…. Do you know if you have any fruit trees on your property?” That is the usual gist of my approach, full of smiling and excitement. Only once, in Georgia, have I been turned away…

We were looking for the remnants of an old 40-acre orchard we discovered through a local Georgia historian who knew a lot about peaches, brandy and a particular Southern family’s plantation drama/legacy. Thanks to his directions, we were right in the epicenter of where the orchard once was and we decided to go door to door knocking, seeking permission to check out the apple trees possibly growing on their property. We knocked on one door and the people were obviously home, just not answering. I left a message on their car about why we were there, how we’d love to look at their orchard (which is the only remnant we could find of the once 40 acre orchard), and my contact information. I got a call later that day: “Hai, I’m lookin’ for Elyyyzuh. My husban’ tol me to call yew and tell yew that yew are not welcome on our properteee.” After I tried to tell her that we were only interested in their apple trees, she kept interpreting/spitting condemning words for her husband, who I could hear in the background.

Upset and saddened by their isolationist/paranoid ways, I wrote the pastor of their church (because we previously talked with the home owner’s mother who told us they belonged to the church on the hill) and asked the pastor to preach a lesson on “Do not neglect to show hospitality to strangers, for thereby some have entertained angels unawares.” (Hebrews 13:2). And then proceeded to tattle on the couple, because if anyone knows me well, you know that I have band of “angels unawares” by my side.

Anyways, back to Vermont. After knocking on every single door we thought might have a property with fruit trees attached to it, we were given wide-spread permission to look around. We found an old, old pear. An old old apple. Another old property with an old pear and apple, etc. And after finding a map from the 1800s, we found an old, old apple orchard. Excited, I promised myself to go back in the fall when they had fruit. AND BOY DO THEY HAVE FRUIT.

This story will be about the first pear tree we found, which I checked first with fingers crossed in hopes that the fruit wasn’t an early season ripener. Luckily, it wasn’t and the tree was loaded with fruit which had just decided to start dropping (!). 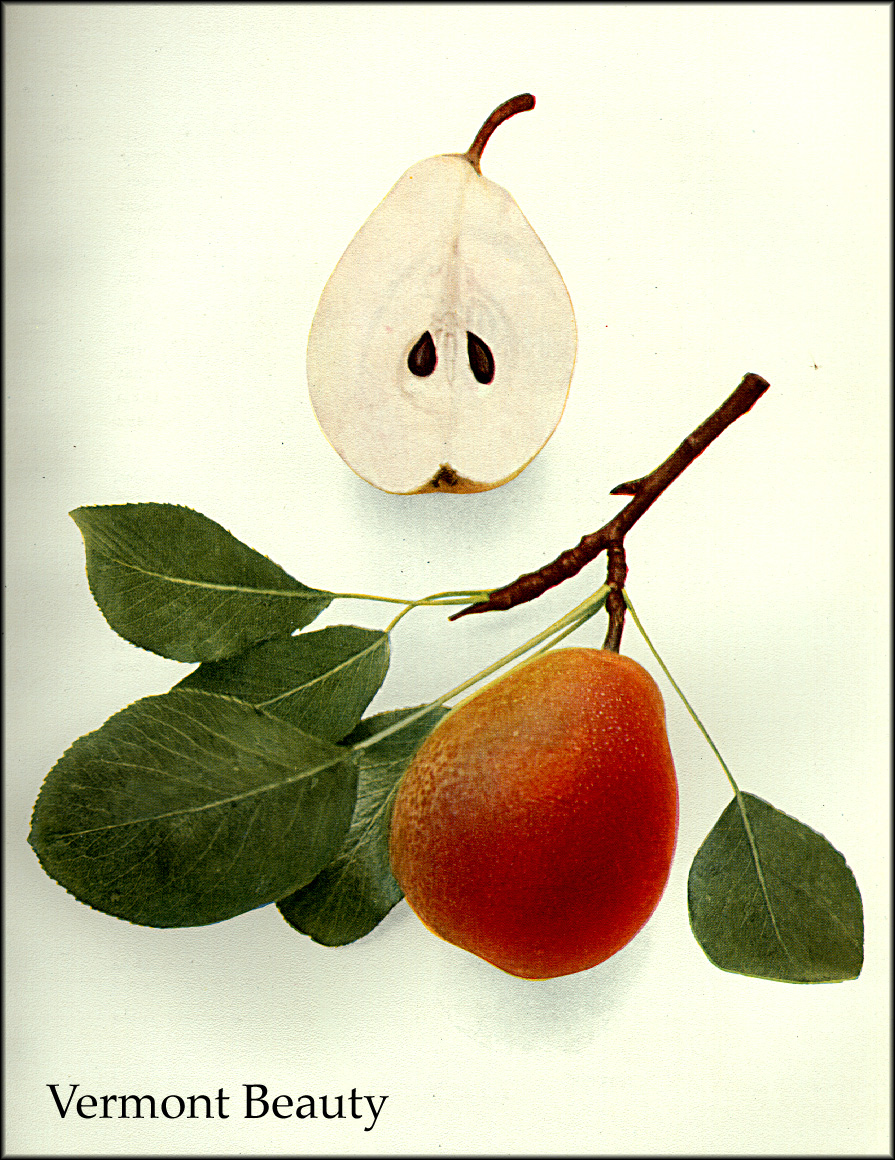 I had every hope back on Memorial Day that this might be the Vermont Beauty. And, well, it may be. An extension agent recently told me that cooler temperatures instigate better color in fruit. With the downright hot fall we’ve had up until a few days ago, that could be a reason for the lack of color on this pear. Otherwise, it seems to match up decently well with the description found in “Pears of New York.” The flavor is sweet, very fine grained, has potential to be buttery-melty in the mouth once it has been given a chance to fully ripen off the tree.  I might be overly hopeful, but…

I stopped at three other properties on Tuesday, each one tied for having the oldest pear trees I’ve ever seen. Here’s one of the trunks (shoe for scale, it was completely hollowed out and probably close to 4 feet in diameter)…

I’ve since done some background research of these properties and they line up with my research as having a connection with Benjamin Macomber, the cultivator of the “Vermont Beauty.” I can’t reveal this connection just yet because it’s a chapter in my book, but just trust me for the time being that they are all connected. The rest is left to old books with descriptions so I can try to key this pear out. The trouble is finding an adequate description of it!  If in fact this is the “Vermont Beauty,” I have just found a lost variety. In order to save it, no matter what it is, all property owners have given me permission to take cuttings this winter from their trees. We might never know the name, but it has proven itself to be resilient for at least 100 years (I think closer to 200), and that is worth saving and propagating.

I hope to graft this tree this year. Some of you might ask for scionwood, which is quite alright with me, but my team and I have been trying to come up with a way to both spread the goods and retain some funding for our future fruit exploring missions.  With that said, the proceeds of this scionwood and future tree sales will go into #thefruitexplorers research fund. We poor-yet-passionate heirloom/resilient fruit nerds will ask that every propagation of this pear (or anything else we find) will spur an on-your-honor royalty donation on our soon-to-be website…and that it’s story be passed on to the new owner (who, if they decide to propagate, will carry on with the royalty donation).

Stay tuned, we have found some amazing specimens this year and there are more to come (we have loads of self-funded research that, of course, costs money). Already, we’ve found a Southern bittersweet crabapple out of Alabama which I think could be the next great Southern cider apple, showing awesome pest and disease resistance. Pending is to see if it has an annual bearing tendency.  Another is a gorgeous, insect and disease resistant (from what I can tell) “sweet” apple that lacks acidity, which Benjamin Watson touts as a great ingredient to blend with high acidity/sugar American heirlooms. Many more…we just need to get our acts together, which is a winter task.

Thoughts? Would love to hear.

One thought on “Fruit Exploring: Hunting the Vermont Beauty”